Shrivenham is a large village in Oxfordshire, England. It was once part of Berkshire, and is close to the border with Wiltshire.

With a population of about 2,400, Shrivenham is a thriving village with many thatched cottages, stone walls, an ancient pump and a Norman church. Each year, the village hosts the Shrivenham Village Fete, which has been an annual event for 25 years. Shrivenham has been the site of UK military colleges since 1946 when the Royal Military College of Science (RMCS) was established on the Beckett estate. This college is part of the Defence Academy of the United Kingdom.

The village has grown considerably since the 1940s in both area and population but much evidence still remains today of the rich history of Shrivenham, one of Oxfordshire's oldest rural villages. 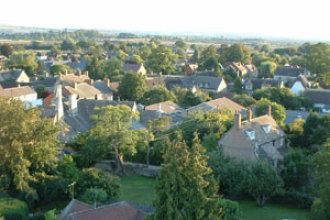 Archeological proof shows that there has been a human settlement at Shrivenham from at least 400 BC, although some Mesolithic flints found locally suggest that the area has been lived in from as early as 4,000 BC. Remains of a Roman villa have been uncovered nearby and one of the earliest records of Shrivenham, or Scrivenham as it was known, is in the Domesday Book (1086).

The entry itemises a church in the village at the time but the exact position of it is unknown. St Andrew's, today's church, was constructed in the reign of Charles II on the site of an earlier church and the present font dates back to the late 12th century.

Despite regular visits from royalty and other dignitaries (Benjamin Disraeli frequently came) Shrivenham survived as a small, quiet backwater for many centuries and it wasn't until 1934 that electricity finally came to the village.