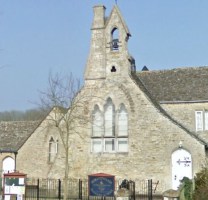 The village school was built around 1863 following a donation of land from William Keppel, the sixth Viscount Barrington. The school has been extended many times over the years to accommodate the growing population of the village.

The school recruits children from Reception to Year 6 aged between "rising fives" (the year children become five years old) and 11. The majority of pupils live in the villages of Shrivenham, Watchfield and Bourton.

Many details about the school can be found on the website: www.shrivenhamschool.co.uk/

The Barn Kindergarten and Out of School Club

The Kindergarten was established in 1994 in Watchfield Village Hall. In 2008 the Kindergarten moved into a converted barn in the grounds of Shrivenham CofE Primary School where it then expanded to include an Out of School club.

The Pre-School runs over 2 session daily. There is a breakfast club running from 8am and afterschool club from 3pm until 6pm. Pick ups to and from Watchfield School is provided also. There is a large, equipped outdoor space which allows the children lots of space to play.